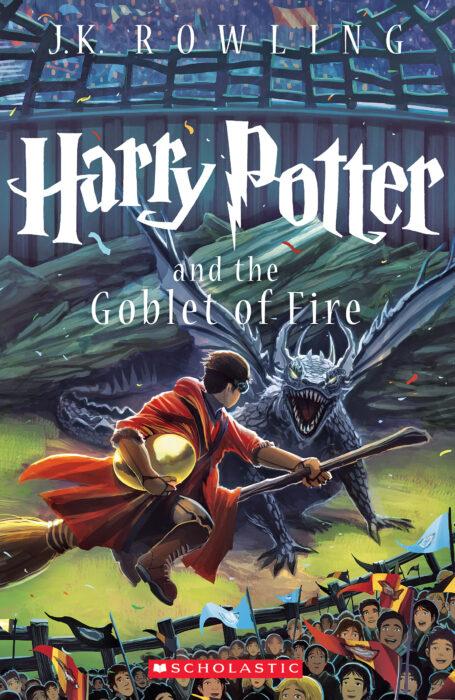 Harry Potter and the Goblet of Fire Summary

Harry Potter and the Goblet of Fire is the fourth part of the famous seven-part series.

The book starts with Harry Potter in his aunt, uncle, and cousin’s house.

Harry had just received an invitation from his friend to a worldwide quidditch match with Ron’s family but he had to ask for his aunt and uncle’s permission though harry quickly got it by bringing up the name of his infamous godfather Sirius black who is actually innocent but only harry, his best friends Ron and Hermione and their headmaster Dumbledore know till now.

So Harry went to the Weasley’s house to wait with Ron and Hermione for the coming day of the quidditch world cup that was arriving.

On the day of the match, they all were up and ready to go. On the way, they met with a boy named Cedric Diggory and his father. He is in the seventh year in their school and the Hufflepuff quidditch team’s seeker (the same position as harry.

In the match, they also saw the youngest official quidditch player name was Viktor Krum.

After the match, there was an unexpected accident with death waters (Lord Voldemort’s followers) but they were silenced by the actual death mark shown off in the forest.

The people decided to take it as an accident since for all they knew the dark lord was dead.

Harry, Ron, and Hermione arrived at their school Hogwarts where all the students found out that they’re bringing back the Triwizard tournament this year.

The Triwizard Tournament is a tournament where three schools come together and form each school, there is a champion randomly selected and the three champions have to face three deadly tasks and only one would be the winner but this time there was an exception and only seventeen-year-olds can enter in their name since their school doesn’t want any casualties.

The schools that are participating are the Beauxbatons academy and drums rang institute.

To enter the students are supposed to put their names in the goblet of fire but there is a charm surrounding it so that anyone under the age of seventeen will not be able to cross through the charm.

Finally, it was the day of announcing the three chosen ones.

From Beauxbatons it was a girl named Fleur Delacour, from Dumstrang it was the quidditch player Viktor Krum and from Hogwarts, it was the Hufflepuff Cedric Diggory.

Then they were surprised as a fourth name appeared and it turned out to be Harry Potter.

So for the first time in the history of the Triwizard tournament, there are four champions not three and they all were particularly shocked since Harry was only fourteen years old.

The Hogwarts gamekeeper and the care of the magical teacher’s happened to be a great friend of harry was horrified so he decided to let harry know what the first task of the tournament will be as a help to him so he reveals that in the first task there will be dragons.

Harry was shocked and was positively sure that the components of the other two schools will know that there are dragons since their school’s headmasters happened to see them so Harry decided that it was only fair to let Cedric know since he was the only one who didn’t already.

Though their new defense against the dark arts teacher professor Alastor mad-eye moody overhears that harry knows about the dragons but instead of getting harry into trouble he gives harry a hint on how to beat them, he told harry to play by his strengths and harry was a natural at flying so since your only allowed to bring your wand, harry practices a summoning charm with Hermione to summon his broom.

On the day of the task, everyone was nervous and harry especially since he got the most vicious dragon from all four.

Since Harry was last he could not see what was happening outside just hearing sounds.

In the end, it was Harry’s turn and what they had to do was grab a golden egg from the dragon’s nest so on the field harry uses the summoning charm to being his broom to him and him flys and eventually grabs the egg, he even finishes the quickest out of the four.

The contestants were supposed to figure out the next task from the golden egg but Harry was still far from that.

Before the second task, they were supposed to have a yule ball.

At the end of the ball, Cedric meets up with harry to thank harry for telling him about the dragons and as for the next clue Cedric tells harry to open the egg underwater which harry does and he finds out that the next task is gonna be underwater with mermaids.

Which made harry panic since he had put off trying to figure out the egg and now he has no way to survive an underwater task but just when it all seemed bad on the day of the task, dobby the house elf came to Harry’s aid and brought with him Gillyweed that gives the user fills allowing them to breath underwater.

The task was that they have to go underwater all the time to the mermaids and free the person that they love the most. In Harry’s case, it was his best friend Ron.

Harry arrived at the underwater place first but he wanted to take the rest of the people there too though the mermaids kept stopping him since he could only take his.

After a while, Cedric Diggory and Viktor Krum came to take their hostages but fleur Delacour didn’t so Harry decided to use force and took on and fleur’s sister with him though it did make him last.

After arriving back at the school he finds out that the fleur got attacked by underwater creatures and got disqualified.

Though Cedric came first, the judges found out about Harry wanting to save everyone and from the score, Harry was tied with Cedric for the last round.

For the last round they were shown that it would be a hedge maze and in the middle would be the Triwizard cup but the maze was also filled with obstacles so all four of the contestants were to get ready for that and the ones that got the most points in the last two rounds will get a head start in their case it was Cedric Diggory and Harry Potter.

It was the day of the final round and the contestants’ family were also allowed to come through harry’s aunt and uncle would never but instead came Ron’s family to support harry.

All four of them were ready outside the maze first went harry and Cedric then it was Viktor Krum then fleur Delacour.

Throughout the maze, all of them faced many challenges and before they knew it fleur and Krum were out so in the room with the trophy harry met Cedric again though it was a giant spider too and they both helped each other again as they had helped each other in the previous two rounds so they decided that they would win together but when they touched the cup, they got transported to a graveyard then Harry’s scar started hurting when a strange man holding something in his hands came.

Harry heard a spell and suddenly Cedric was dead beside him.

Harry was devastated and with a second look, he could tell that the man was none other than Wormtail who had betrayed Harry’s parents which led to their deaths, and in his hand he was holding a baby version of Lord Voldemort.

Wormtail pinned harry to a gravestone and he started performing some sort of dark magic using a bone of the dark lord late father that worm tail took from his grave then he cut off his own arm then he took some of Harry’s blood then he finally he dropped the strange baby type version of the dark lord, although Harry did not get it at first but then from between the magic came out the dark lord with finally a body of his own.

No Comments on Harry Potter and the Goblet of Fire Summary