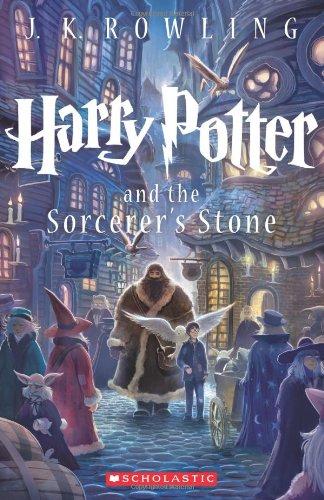 Harry Potter and the Sorcerer’s Stone

Harry Potter and the Sorcerer’s Stone is a sci-fi adventure novel written by j.k Rowling

It’s the first part of the famous seven-part series.

The story begins with a boy called Harry whose parents are dead and now lives with his aunt, uncle and cousin. After being bullied by his family for his whole life, Harry finally finds out the truth about who he really is when he gets a letter from a mysterious school that has accepted him on his eleventh birthday.

Harry is a wizard and his parents didn’t die from a car crash that his aunt and uncle claimed they actually died at the hands of the worst dark wizard there is but the night is still a mystery since till that day the dark lord has not been seen nor heard.

Though Harry does not know yet he is quite famous in the wizarding world since he is the only one that has ever survived a killing curse with nothing but a lightning bolt-shaped scar on his forehead.

He goes to his new school, Hogwarts where he makes friends with Ron Weasley, an ordinary poor boy with six other siblings who have always outshined him and Hermione’s Granger the typical know it who they didn’t take a liking to at first but became good friends with.

There were also other students like Neville Longbottom, a naive boy who lives with his grandma and Draco Malfoy the rich, school bully who becomes Harry’s rival.

Harry gets chosen to be in his house’s quidditch team. Quidditch is a sport in the wizarding world that includes two teams with seven players each.

The first time in a while harry could finally call a place home but after a while, things started to seem a bit off, he, Ron and Hermione find out that their school is currently being a safeguard by an object called the sorcerous stones that can turn any metal into gold and make an elixir that can grant eternal life but that someone is trying to steal it.

Harry immediately blames the potions master called professor Snape since the professor hated Harry and tried to kill him once in a quidditch match and he was really suspicious too.

At first, Harry thought that the professor was just trying to make some money but later after finding out that the dark lord is still alive lurking in the shadows trying to gather enough strength to come out in the open. Harry realizes that snape is actually trying to get the stone so he could get the elixir of life and give it to his master. So after the last clue fits in place, Harry grabs his father’s invisibility cloak that someone gave to him in Christmas and goes to the place where they found out the entrance with Ron and Hermione though they need to face countless challenges along the way.

Like a three-headed dog that was kept by hagrid the keeper of keys in Hogwarts then they have to pass the herd of flying keys set by the charms teacher also they have to beat the giant chessboard arranged by the transfiguration.  Where Ron gets knocked outcrossing that they reach a room with a dead giant that had obviously been defeated but was kept by their defense against the dark arts teacher, in the next room was a task set by their potions teacher himself but only one person could go to the next room so harry suggested Hermione to take on and go back and contact there principle, professor Dumbledore who is also known as the only person the dark lord was afraid of.

Harry moved to the next room that could only be the one set by the principal. Inside the room was a tall mirror known as the mirror of Erised that can show your hearts deepest desire and standing in front of it was not the potions master but their defence against the dark arts teacher professor Quirrel he told harry that it was actually him all along and the one who tried to kill him in the quidditch match was also him though he would have succeeded if the potions master snape was not trying to save him.

He receives quite a shock but tries to get in view of the mirror because not so long ago in that mirror he saw his mother and father looking back at him but at this moment his deepest desire was to get the sorcerer’s stone before Quirrel could.

In the reflection he smiled and from his pocket, he takes out a small red coloured stone then puts it back in but since Quirrel is a full-grown wizard with the dark lord helping him he finds out that something is wrong so he and Harry have a fight. Luckily Harry holds up until Dumbledore arrives then the next moment he finds himself on a hospital bed weeks from the accident.

Dumbledore is sitting next to him and tells him that it was an idea that he came up with. The person who really wants to find the stone and not use it will be the only ones to get it or else they would have just seen themselves making gold or drinking the elixir.

Dumbledore also tells him that they decided to destroy the stone and the reason why Snape hated Harry is because he hates Harry’s father but Harry’s father saved Snape’s life.

Harry Potter and the Sorcerer’s stone was a type of book that you are bound to like if you enjoy fiction, adventure, and action or you overall are a fan of classics.

The book is a real rollercoaster when it comes to surprises and last-minute twists though if you read it from a different perspective you see that the defense against the dark arts teacher was always the one behind all the casualties. This book can really get you to believe that one thing going on but change your entire view of the whole situation at the end.

No Comments on Harry Potter and the Sorcerer’s Stone