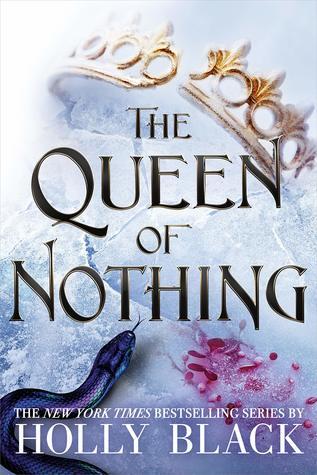 The Queen Of Nothing Summary

The Queen Of Nothing starts with Jude in the mortal world since she was exiled from the faerie.
Jude now lives with her older faerie sister Viviene and her younger brother Oak, who is now eight years old and will be the future high king though he doesn’t want to.
Jude gets a job to stop a faerie cannibal named Grima mog from eating her kind in the mortal world she accomplishes by a duel.

When she returns to their home, Jude is surprised to see her twin sister Taryn there, which is bad since the last time they met, Taryn had betrayed her, and they are still not on good terms with each other.
Taryn had come to ask a favor from Jude, which seemed absurd but the problem was Taryn’s husband Locke had died and since he was an immortal, he was killed by someone.

The high king Cardan has put a trial to question people, and Taryn is also gonna be questioned which she is scared about since she is the one who killed him and if the high king uses magic, she’s going to spill everything, so she wants Jude to go there and pretend to be her to trick the folk of faerie.
Vivienne thinks it’s too dangerous since if they found her, they would take her to execution, but Jude couldn’t deny the opportunity to go back to the faerie, and even if they use magic on her, Jude can lie since faerie magic doesn’t work on her because of the geas.

That was placed on her from the past Prince Dain.

Jude accepts the favor after a while of thinking, and the following day, she gets ready to go to the faerie in Taryn’s clothes but just after, she has enough information on what’s going on so that she doesn’t seem suspicious.
When Jude arrives at the faerie pretending to be her twin, she stays at Taryn’s house for the night and prepares.
Then Jude goes to the trial where they think that she’s Taryn and take her for searching to make sure that she doesn’t have any charms that can be used against magic though Cardan had immediately figured out that it was Jude the second he saw her, he wasn’t calling any guards or anything.

Suddenly they’re under attack from Jude’s foster father who actually came in the hopes of rescuing Taryn, but they take Jude instead, so she has to keep pretending.

They take her far away, where Madoc and his armies are planning to go against Cardan with their alliance with the court of teeth.

Jude figured out that they are planning to get the throne from him and make Madoc king.
During the time that she’s there, Jude tries to get information and a way to escape.

One night she packs the necessities and leaves, but she stops when she hears a scream from a cave and decides to sneak in and check out what’s happening.

Inside, the ghost used to be the court of shadow’s one of the original members, but he betrayed them, which ended in Jude being captured by the undersea.

He was locked in chains, and Jude discovers that he had never betrayed them because he had no choice since Locke had his full name, and now Madoc does too.

If anyone knows the full name of another folk from the faerie, they can control them.

Jude decides that she will help the ghost and then escape, so she goes back to where she meets her foster mother Oriana, who it looks like found out that it was Jude that was here instead of Taryn.

Oriana didn’t tell anyone and said that she would help Jude get out of here so she sent a letter to Vivienne about the address and the situation.

A few days later, when Jude was sleeping, she realizes that there is someone in her room but it turns out to be the roach accompanied by the high king Cardan, and they were here to rescue her.

When Vivienne got the message, she wasn’t sure if it was fake or not so she went to Cardan for help since he had told her to contact him if she gets any message though her sisters were waiting for them along with another person who later turns out to be Grima mog.

Jude, though, still wants to save the ghost, so she goes along with Cardan and the roach to retrieve the keys to his chains, but they get caught up in traps. The roach gets hit with an unknown poison, so Cardan has to go back with him while Jude promises to return and goes to the cave where the ghost is being held, but when she gets there, he is nowhere to be seen, so it’s apparent that he had received another order.

In the cave instead was Madoc, who had also figured out about Jude’s secret, and they dueled, but it is evident that Madoc was going to win since he was the one that had taught Jude.
The battle ended with Jude getting a grave injury, but she had already found his sisters and Grima mog by then, and they had made Madoc turn away.

Taryn quickly stitched Jude’s wound since she was good at sewing clothes but half of the reason why she was still alive was that the land healed her since she is the queen of faeries.
Jude immediately left for the high castle since she thought Madoc ordered the ghost to assassinate the high king Cardan.

When she arrives, she has pulled some stitches so she faints but by then, Cardan had already announced that Jude is the rightful queen of the faerie.

When Jude regains consciousness, she helps the high court with the upcoming battle with the Madoc army and provides them with all the information that she could get when she was able to get to their camp. Her siblings and Grima mog also stay in the castle, including Heather, who was Vivi’s girlfriend.

One day Taryn calls Jude and Cardan to the Hallow hall which was where Cardan used to live and when they arrived, Jude was surprised to see that the ghost was also there and that he didn’t get orders to attack the king; the charges were to attack the queen of the undersea which he did unwillingly but then Taryn found him and stopped any other orders he had received since she also knew his real name because Locke was very careless with things.

Then it was time for Madoc and his army of traitors to arrive and he was really surprised to find out that Jude was alive and even more so when he found out that she had become the high queen of faerie.

Madoc tried all of his tricks against Cardan and the people of the faerie but they failed since Cardan said that who becomes king is the choice of the people and the crown is nothing more than an accessory, so he breaks the blood crown, but there was a curse on it, and it turned Cardan into a huge serpent.

Everyone started to panic, and with the king gone, Jude had to take control, so she began to give out orders, including that Grima mog becomes the new general but as far as they knew, there was no way to turn Cardan back.
In the end, Jude made a truce with Madoc and the court of teeth in exchange for a way to turn Cardan back before his snake version destroys all of elfhame.

Jude made the right decision and cut off its head and from inside came out the real Cardan so they had won.
In the end, Madoc, his army, and the court of teeth got their punishment, but Oriana was spared since she had changed sides to be with her son oak.

No Comments on The Queen Of Nothing Summary