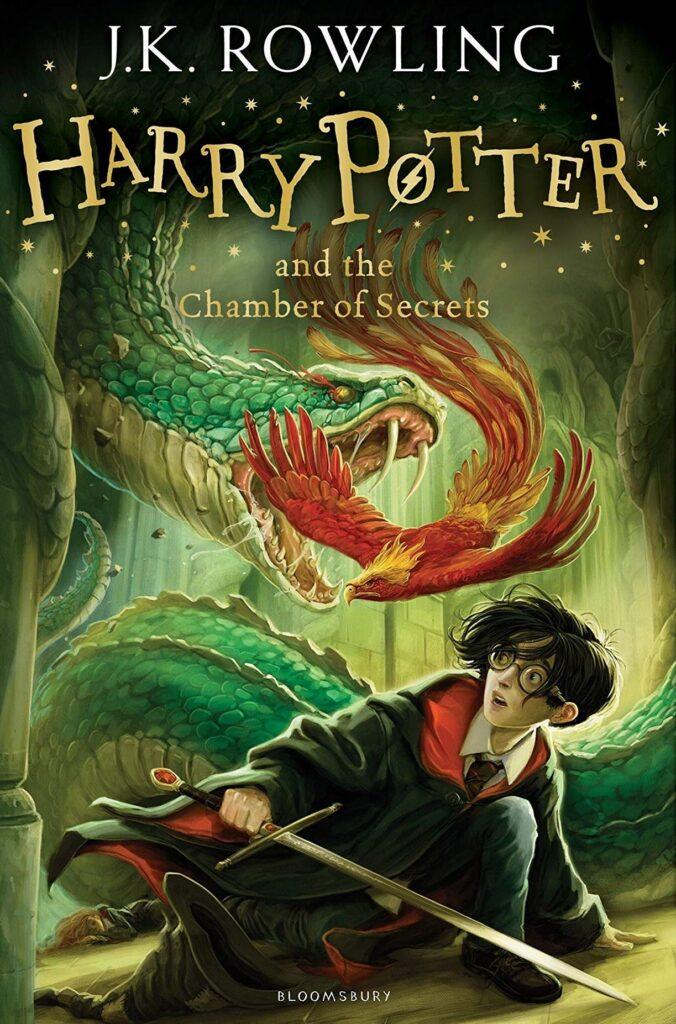 Harry Potter and the Chamber of Secrets Summary

Harry Potter and the Chamber of Secrets is a sci-fi adventure novel written by J.K Rowling.

It’s the second book of the famous seven-part series.

The book starts with Harry in his aunt and uncle and cousin’s house and Harry’s who had gotten no letters from his best friends Ron and Hermione the whole summer was feeling a bit lonely.

His uncle’s guests were to arrive that evening and his uncle strictly forbade harry to make any sound whilst they were here but when harry returned to his room, he was surprised to see a house elf on his bed.

The house elf’s name is Dobby and he claims that Hogwarts will be in mortal danger and that harry must not go back but harry denied it since his school was the only place where he had ever really felt at home and harry was extra angry since he found out that dobby was stealing every letter that was supposed to be given to him so harry would not go back.

Angered by his decision, the house-elf went downstairs to create some mischief to get Harry grounded and he achieved that by floating the dessert and dropping it on top of Harry’s uncle’s guests.

Harry’s uncle was so furious that he even went to the trouble of adding multiple locks on his door and adding bars to his window.

In the night, when Harry was trying to sleep, he heard a strange noise and when he looked at the window. He was shocked to find the face of his friend Ron Weasley looking through the bars right at him.

When Harry had a closer look he found out that Ron was in a flying car with his fun, older, twin brothers Fred and George. They all had come to take harry.

Harry passed his luggage and his pet owl through. By the time Harry’s family realized what he was up to and opened all the locks, Harry was already in the car and they started to fly away.

After that, Harry arrived at the Weasley’s house which was decked with stuff that’s magic. It’s also where he meets Ron’s father who works for the ministry of magic in the muggle (non-wizarding people) department and Ron’s only little sister who is also going to be joining Hogwarts this year.

He stayed for a few days when it was time to get his books. The Weasleys planned to go get their items via floo powder that Harry soon found out was a way that wizards and witches can travel throughout the world.

They all go to a diagonal alley where Harry also meets up with his other friend Hermione. This time around, all the defense against the dark arts books were from the same author called Lockhart who was signing books at the store and in the shop is also where to Harry first time meets Draco Malfoy’s father who Harry instantly dislikes because of his hate for muggle-borns and his selfishness.

On the platform, nine and three-quarters Harry and Ron try to go through the magical gateway but unfortunately, it gets blocked for some reason si they decide to use Ron’s father’s flying car to follow the train to Hogwarts which they surprisingly manage to do but unfortunately while trying to land they crash into the whomping willow that almost beats them to death but they escape.

When arriving at the castle they both get a very big lecture about how stupid they were to even try to attempt something like this and they both get detention.

Harry is doing detention with the new teacher, professor Lockhart who shockingly took the post of the defence against the dark arts. While serving detention he hears a strange noise that no one else can hear then when he finishes detention he goes to follow the sound with Ron and Hermione and it leads him to a wall on it was written ‘the chambers of the secret have opened, enemies of the heir, beware’ with red paint and the school caretaker’s cat was with it, petrified.

The students later find out that the chamber was made to kill or petrify all the muggle-borns and there is a huge monster that can only be controlled by the heir of Slytherin though it is just a myth.

After that, takes place in the first quidditch match that was between Gryffindor and Slytherin where Draco Malfoy got the same position as harry but on the opposite team, harry wins but it was very narrow.

Throughout the book, muggle-borns keep getting attacked but luckily none have died.

The defence against the dark arts teacher Lockhart and the potions teacher Snape decide to open a club that tells how to protect themselves.

It was a very bad idea. During the club, snape decides that for example, Draco will fight harry but of course Draco does not do what he was told to but instead he conjures a snake and everyone finds out that Harry can talk to snakes which are not good since the only one that could do that was one of the founders, Salazar Slytherin so everyone starts to think that Harry is the heir of Slytherin.

When once Harry, Ron and Hermione were going to the quidditch field, Harry heard the same voice again and that’s when Hermione instantly went to the library.

They later find out that Hermione got petrified.

One day Harry and Ron were in the hospital with Petrified Hermione when Harry noticed something strange. Hermione had a piece of paper clenched in her fist and when they took it out they realized that it was a page from a library book.

In it was written about the king of snakes named the basilisk and that whoever it looks at will die immediately and written below the description was the word ‘pipes’ written in Hermione’s handwriting and for Harry it suddenly all fit in place.

The reason that Harry was the only one hearing this bodiless voice was that he was the only one that can talk to and understand snakes and as Hermione had written it was moving through the piles in the wall and the reason that none of them was dead was that none of them looked the basilisk straight in the eye, altogether everything strange that happened throughout the year fit in place and harry also figured out the location of the entrance to the chamber of secrets and why no one ever found it.

Harry and Ron were beyond excited and they went straight for the staffroom to tell their head of house all the information that they received but when they arrive they overhear that there was another message left on the wall and that a student was taken inside the chamber of secrets, they both then find out that it was Ron’s younger sister ginny.

They go to the office of their new defence against the dark arts teacher’s office to tell him since he was assigned to find the location but they were shocked but not too surprised to find out that professor Lockhart was a fraud so Harry and Ron take it upon themselves to get Ginny back.

They arrive at the place that Harry thinks is the entrance and then he speaks the snake language ‘parseltongue’ and the gate opens.

Though there still were challenges and by the time they reached Ginny who was unconscious, Harry was left alone. There he meets the memory of Tom Riddle.

He was more than a ghost but less than a human. Harry finds out that the whole year Ginny was using a cursed diary that often controlled her to the basilisk out and remove other obstacles.

She used the diary to the point that it sucked out enough energy that it enabled the memory of Tom riddle to have a form but the worst part was that tom riddle is actually the dark lord before he took on the name Lord Voldemort.

Riddle called forth the basilisk and just when things started looking really bad for harry, suddenly the headmaster’s pet Phoenix faux appeared with the sorting hat and at the beginning harry didn’t know what to do but faux helped a lot by blinding the basilisk so harry doesn’t die by looking at it in the eye but still it wasn’t enough, the ginormous snake could still smell harry but when harry wore the sorting hat he was surprised when a huge sword appeared and Harry used it to kill the basilisk then he defeated riddle by stabbing the diary he came from with a basilisk fang.

Harry took Ginny who had then woken up and they all left together with Ron.

At the headmaster’s office, Harry and Ron recall everything that happened to Dumbledore when suddenly Draco’s father arrives with Dobby the house-elf behind him. He came to talk to dumbledore but Harry was looking at the house-elf who kept signing towards Lucious Malfoy and behaving strangely when harry understood that this was the doing of Lucius Malfoy and that he was the one who put the diary amongst Ginny’s things so harry went to confront him and harry also freed dobby in the process.

No Comments on Harry Potter and the Chamber of Secrets Summary