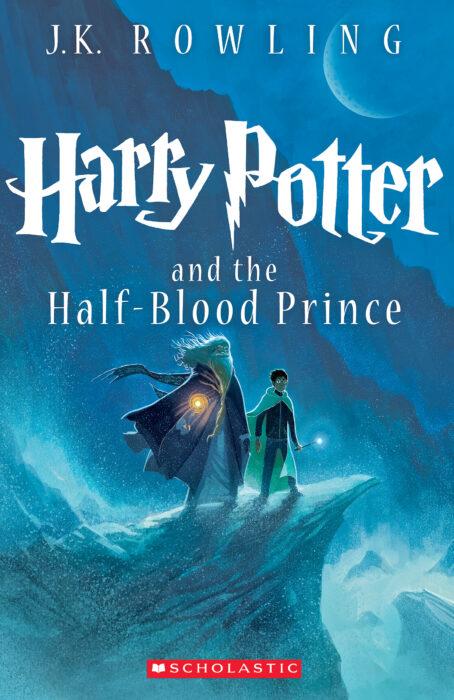 Harry Potter and the half-blood prince is the sixth part of the famous seven-part series.
The book begins with Harry at his home. He just got a note from his headmaster that he’s gonna pick Harry up early and send him to the Weasley’s house so Harry waits for him. Still, when his headmaster Dumbledore came he sent Harry’s luggage to the Weasley’s house and took Harry to an old teacher. Harry was supposed to charm the old teacher back to work since the teacher had a habit of choosing a talented, selected few and watching them grow up to be famous people.

To him, Harry was probably a one of a kind but Dumbledore had warned Harry just in case. When Harry had convinced the old professor Slughorn, Dumbledore took him to the Weasley’s house to spend the rest of the summer vacation, and Harry slept in his best friend Ron’s room, and Hermione was also living there but with Ginny.

When it was time for potions, Harry headed there, but he and Ron didn’t have the potions book. Hence, professor Slughorn allowed them to have one from the cabinet. Harry got an old one with things crossed and written on it, so when it was time to make the said potion, instead of following the official instruction, harry followed the ones written on top of them and in the end he had created a perfect potion that was better than one of his best friends the class topper Hermione Granger. As the promised gift he got a small bottle of Felix delicious which is basically liquid luck.

Throughout the year, Harry had secret lessons with Dumbledore where he shows Harry continues memories of the dark lord’s past for Harry to know more about them, and strangely enough, there have also been strange attacks in their school though this year the security was tighter.

It was also weird since Harry monitored his rival Draco Malfoy’s movements in his magic map because suddenly he would disappear from time to time but mostly at night, which bothered him.

Harry was getting spectacular results in potions, and he quickly became professor Slughorn’s favorite with the help of the written textbook, which he found out belonged to some half-blood prince, but Hermione was totally against that book and said that it could be a possible dark object.

Once Dumbledore showed Harry a memory of Professor Slughorn. Still, it was tampered with, so the headmaster had given Harry the task to retrieve the real one which he managed with the help of the luck potion Felix Filius and the right moment.

The actual memory gave proof that the dark lord had made Horcruxes that contain a bit of a person’s soul, so even if the person dies, he can come back, but the dark lord did what no one had ever done and created seven of them.

Dumbledore showed I harry that Harry had already destroyed one in his second year when which was Ridley’s diary and dumbledore had broken the second which was a ring that was passed down in generations in the Ridley’s family and Harry made dumbledore promise that he would take harry along the next time he had found one.

In the lessons with Dumbledore, Harry had also found out the reason why he and his parents were targeted when he was small.
Because of a prophecy that their divination teacher, professor Trelawney unknowingly made about a boy born in July whose parents had twice defied him and the dark lord would make the boy his own enemy since none can live while the other survives.
A death eater had heard half of the prophecy and went to tell the dark lord, and this time, the dark lord was trying to get the complete prophecy last year when the record of it broke, making him unable to.
Dumbledore had finally found another Horcrux, and as promised, he took Harry along with him.
Harry and Dumbledore have to cross multiple dark spells to get there, but the Horcrux insight was in a water basin, and one of them had to drink the water to get it, but it would unquestionably do something to the drinker.

So Dumbledore decided to drink and told Harry to force him If the drink did something to him, and he denied it.
As Dumbledore finished the water, Harry grabbed the necklace, which was a Horcrux, and he took Dumbledore with him and went back to Hogwarts through the headmaster was undoubtedly weakened.
At Hogwarts, they saw that there was a dark mark shown at the top of the tallest tower in their school, and they both flew towards it with brooms.

Dumbledore told Harry to wear his invisibility cloak and run to get the professor to Snape, but as someone else came, Dumbledore stunned Harry so he couldn’t move.

Draco Malfoy was standing before dumbledore with his wand raised, and he told dumbledore how he made a way to let all the death eaters into a palace and that he had to kill dumbledore now or else the dark lord will kill him. Still, Dumbledore was just on the point of making Draco lower his wand when the rest of the death eaters joined then came in Severus Snape and he did the finishing blow, and Dumbledore, their headmaster, had died. It wasn’t even worth checking it since the moment he said the curse harry could move again, and he ran after snape, Malfoy and the death eaters while warning the giant battle that was going on in between the hallways between the death water against the D.A and order of Phoenix.

While running after Snape, Harry also found out that the snake was the half-blood prince when he tried hitting him with a curse that the prince invented. Still, they all escaped, and it was too late, and Harry, Ron, and Hermione agreed to go with Harry to find the rest of the five Horcruxes since the necklace was stolen by someone else, and the one Harry and Dumbledore retrieved was a fake.

No Comments on Harry Potter and the Half-blood Prince Summary