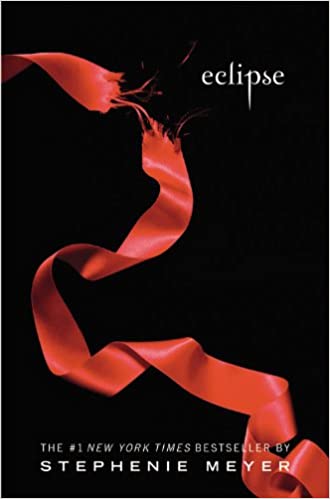 The Twilight Saga: Eclipse starts with Bella in her house, and Edward comes over with more college options for her.
Edward reads a newspaper saying there have been multiple attacks in Seattle and Edward says that it was probably because of a new bloodthirsty vampire.

Edward who starts being overprotective about Bella stops her from visiting her best friend Jacob since he’s a werewolf and vampires and werewolves are sworn, enemies.
Edward even sabotages some of Bella’s attempts to go see him.

Then Alice gets a vision of the future where she sees victoria who is a vampire that wants to kill Bella to get revenge so to keep her safe Edward urges Bella to go visit her mother which they do and when they come back, Jacob tells Bella everything including the vampires and the werewolves run-in with each other that almost created a big fight.
one time when Edward had to go hunt, he made his sisters plan a sleepover to keep Bella busy so that she doesn’t go see Jacob but Bella manages to sneak out and see him anyway.

Later when Bella comes back, Rosalie who doesn’t like Bella tells the reason for her dislike is that Rosalie didn’t want to be a vampire and that if there was s choice, she would have exchanged everything she had to be a human again but their Bella was not even thinking twice before asking to be one and all in all, Rosalie, manages to make Bella rethink her decisions.

After Edward stops being a little less overprotective, he lets Bella visit Jacob from time to time.
One day when Bella returns to her home, she notices that her room was searched through and that some of her clothes are missing and Edward confirms that it was probably a doing of a newborn vampire but it was weird since if it was, he would have also eaten her father charlie who was sleeping in the other room at the time.

Later, Jacob comes to pick the unknown scent for the werewolves to track and Edward also tells her that the killing spree in Seattle has worsened which has to lead to the Cullens believing that someone is making a newborn vampire army.

During a gathering of the Cullens family, jasper who is Edward’s brother tells Bella that he was originally turned into a vampire to work for a newborn vampire army and that newborn vampires have a lot of strength but no tactics so the Cullens decide to stop the newborn army before the Volturi arrives.
Once Bella visits her best friend Jacob where he tells her that she loves her but Bella denies saying that she only ever considered him a friend but Jacob still doesn’t back down.

Later Bella realizes that maybe the vampire that came to her house and the newborn vampire army is somehow connected and she believes that they want to kill Bella so she tells Alice immediately who was with her at the moment then Edward after a while.

Jacob and his werewolf friends Embry and quill come to Bella’s graduation party at the Cullens house where Alice suddenly gets a vision and sees the vampire army marching into forks so the Cullen vampires and the werewolf pack make an alliance against a common enemy.

The werewolves and the vampires then have meetups in the woods where jasper tells them how to fight and kill newborn vampires and Edward and Jacob coke up with a plan to hide Bella in the woods, far away from the action and Edward agrees to stay with her along with Seth who is a young werewolf that is new in the pack.
Only moments before the battle, Jacob learns that Edward and Bella are gonna get married so he becomes really mad and tells Bella that he is gonna kill himself in battle, and that’s when Bella realizes that she is also in love with him.
Edward forgives her saying that it’s her decision.

The fight goes smoothly but out of the blue, Victoria and her companion really come to their camp where Bella is so Edward fights with victoria while Seth takes on Reilly.

It comes very close but Edward and Seth by working as a team and a little help from Bella who posses a distraction than at the end, the Voturi appears and they are surprised to find that all the work has been taken care of and then they leave still not knowing of the existence of werewolves.

Later Bella visits Jacob who had gotten wounded in battle and tells him that about her decision of marrying Edward since she still loves him more and she leaves knowing that she has made the right decision but is still a bit upset about marrying though she agrees to it and even let Alice plan and organizes a big wedding which she is worried about.

In the end, Jacob gets a wedding invitation which he is angered to find and he changes into his wolf form and disappears into the woods.

No Comments on The Twilight Saga: Eclipse Summary